A new standard of technology has been developed to assist in identifying sentinel lymph nodes; Sentimag and Sienna are currently widely available across Europe, Australasia, Singapore and Hong Kong and is soon to be launched in South Africa by Sysmex (80% of treatment is based on diagnostics-VDGH*). 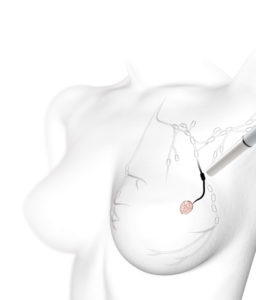 Why is the sentinel lymph node so important?

After initial diagnosis of a breast cancer, following a visit to the mammogram department, many patients will hear the term sentinel lymph node biopsy. This is an important diagnostic test that is scheduled when there does not appear to be any lymph node involvement both radiologically and clinically. This procedure then checks to see if any breast cancer cells have ‘travelled’ to the ‘first’ lymph node that these cells would ‘drain’ to, usually in the axilla (armpit region). 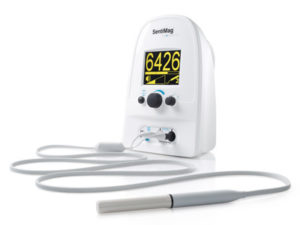 How does Sentimag and Sienna work?

The tracer, Sienna, is a dark  brown water-based liquid which contains superparamagnetic iron oxide (SPIO) particles (60nm); these give off a tiny magnetic signature, when magnetised. In this way, the magnetic particles are detected by the Sentimag probe. Also, thanks to its brownish colour, Sienna is not only magnetically but also visually traceable.

How is Sentimag different from current methods of sentinel lymph node localisation?

Most importantly, this technique is surgeon controlled. The surgeon can inject the Sienna at a time that best suits them and the patient, from 20 minutes up to seven days in advance of surgery. No scheduling is required pre-operatively at another department. There is no need for radioisotopes or blue dye. It offers precise detection as there is no stray radiation. Particle  size is optimal for retention by the sentinel lymph node.

What does this mean for the patient?

Please visit www.sysmex.co.za for more information about Sentimag or contact Julie on 076 404 1914 or email Belloni.Julie@sysmex.co.za

Welcome to the Apr-May 2022 issue of Buddies For Life, the theme for this issue is Choose a healthier you. END_OF_DOCUMENT_TOKEN_TO_BE_REPLACED

Welcome to the Apr-May 2022 issue of Buddies For Life, the theme for this issue is Choose a healthier you. END_OF_DOCUMENT_TOKEN_TO_BE_REPLACED

Welcome to the Feb/Mar 2021 issue of Buddies For Life, the theme for this issue is Feb/Mar 2021. END_OF_DOCUMENT_TOKEN_TO_BE_REPLACED

Welcome to the Feb/Mar 2021 issue of Buddies For Life, the theme for this issue is Feb/Mar 2021. END_OF_DOCUMENT_TOKEN_TO_BE_REPLACED