Anri Smit shares some of the findings from her PhD research, involving a multi-modal narrative approach to gain insight into the breast cancer stories of South African women living with recurrent disease.

The story of living with breast cancer differs from one woman to the other, and often encompasses the throws of treatment, physical side effects and the general life-altering nature of the disease.

The story of having the breast cancer return for a second time (recurrent disease), although less well-known, has often been described as even more devastating than the first episode.

What are the subjective experiences of women with recurrent breast cancer?

In my research, I sought to answer the following questions: What are the subjective experiences of South African women with recurrent breast cancer, and what are the meanings they attach to their experiences?

I gathered the stories of 12 women diagnosed with recurrence, who had been attending a public hospital in the Gauteng region. Part of my study involved the use of an artistic method, called body mapping.

The body mapping process is interactive. It involves the co-creation of a visual narrative by both the researcher and the participants. Life-size canvasses are used. A body map may include, among others, a self-portrait, major life events, significant others, cultural values, support structures, personal slogans, and/or a future script.

Portraying the lived experiences of women with recurrent disease was the focus of my study. Each woman told a unique story. Extracted from my doctoral thesis are the stories of Meredith* and Heather*.

Meredith (55), diagnosed with Stage 3 breast cancer in 2013, was treated with chemotherapy and a lumpectomy (with reconstruction and lymph node removal). This was followed with radiation and a five-year course of tamoxifen.

A year later, in January 2018, she was diagnosed with recurrent (aggressive) Stage 4 breast cancer in the same breast as before. Treatment included a mastectomy of the right breast, as well as (requested by herself and approved by her oncologist) a prophylactic total mastectomy of the left breast.

A reason for her recurrence

Meredith believed there was a reason for her recurrence. Attributing her fate to the divine will of God, she recalls feeling chosen for a greater purpose, “There’s a purpose. There’s a very big purpose that He [God] is busy with. I should actually feel special that he has chosen me.”

Meredith’s body map displays the centrality of her relationship with God. For instance, the image of a person kneeling in worship next to a Bible and the word faith centred across her midline, all speak to the importance of her walk with God amidst her breast cancer journey.

Moreover, her posture (body map) portrays both an act of repentance to God (raised hands) and determination to fight the disease (flexed muscles and boxing gloves). The yellow background represents “Sun, and new life. It is bright and lively.” Meredith chose to keep her body colourless, meaning “White is always positive and light. Clean and white.”

Intertwined with her mastectomy scars, she chose to draw breast cancer ribbons across the area of her chest where her breasts used to be. Encircled in a heart, she depicts her family members – her greatest source of support during her breast cancer experiences.

Reflecting on her desire to survive cancer for a second time, she describes her greatest motivation as follows, “I have three beautiful girls, I can’t give up the fight now.” Exemplifying her stance toward having recurrent breast cancer, Meredith “realised there is just one option. Must fight and stay positive.”

Finally, indicated in bold words on each of her legs, Meredith’s message to other women with breast cancer was to “Be the warrior” and “Never give up the fight”. 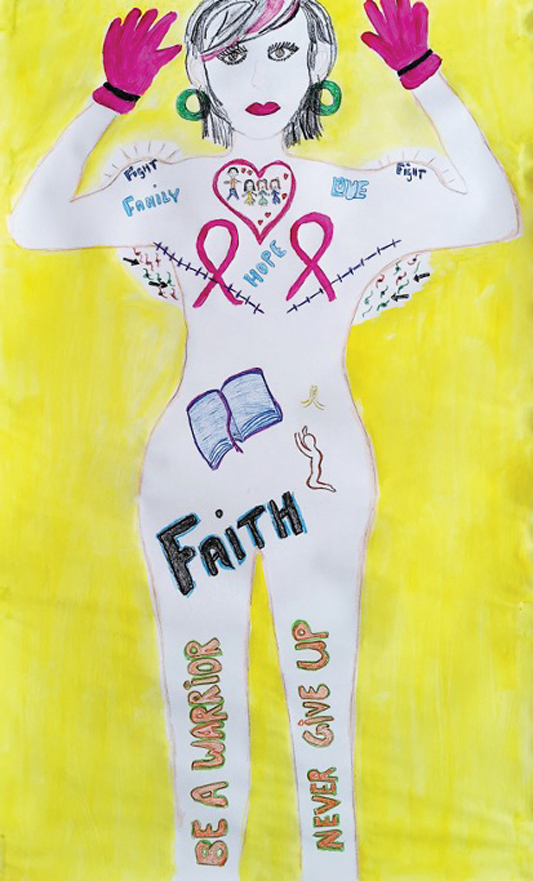 Heather (46), first diagnosed with Stage 2 breast cancer in 2013, was treated with chemotherapy, a double mastectomy and radiation after which she started using tamoxifen.

Five years had passed before Heather noticed a new lump. This time in her underarm region. In August 2018, she was diagnosed with Stage 4 cancer.

The cancer had already metastasised to other organs (bones, liver and lungs). She was treated with chemotherapy and continued with treatment well in to 2019.

What I found to be the central theme in her story was her determination to survive breast cancer for a second time. She noted, “I don’t have to be cancer-free or in remission to be a survivor. Even if cancer has spread everywhere, as long as I am fighting and living to see another day, I’m a survivor. NOTE TO SELF: There will be very bad days along the way but I’ll get through this, I’ll fight as long as there is breath in me.”

Her body map illuminates her survivor identity. For instance, she wished to incorporate a butterfly and the word survivor in her body map. When asked to elaborate, she explained, “From being diagnosed, being sick and then with the treatment and getting well again and then being this new person who wants to – who appreciates life more. I’m like the pretty butterfly.”

Interestingly, reflecting on her experience of creating her body map, Heather states how the art exercise caused her to “look at some aspects of my journey that I hadn’t even thought about.”

She recalled making a deeper connection with her own story after expressing it visually.

I understood that the visual component of her story had evoked a deeper sense of meaning, as described as follows, “At the end of the day, I strongly believe that recurrence is something I can go through the same way I did the first diagnosis. I might have had fears and feelings of dread but after today, all I want to do is to live and use my time wisely and to help others along the way. When I think of the future, I see laughter, joy and friendship. I see travel and trying out new things, spending as much time as I can with family. I see myself as a survivor. For me, being a survivor has a new meaning. It means getting up every day and fighting. It means getting up after a fall.”

Area 495 in Heather’s body mapping represents the oncology clinic where she received chemotherapy, which she described as a “space of hope”. The theme of hope is repeated in her pink complexion and the pink breast cancer ribbon. The fading green represents life, which is juxtaposed against the bright tangerine liquid (chemotherapy) entering her body.

Like the butterfly on her body map, Heather seemed to have claimed a new identity, which not only seemed to have ignited a new purpose to her suffering, but also gave her story its name: metamorphosis. 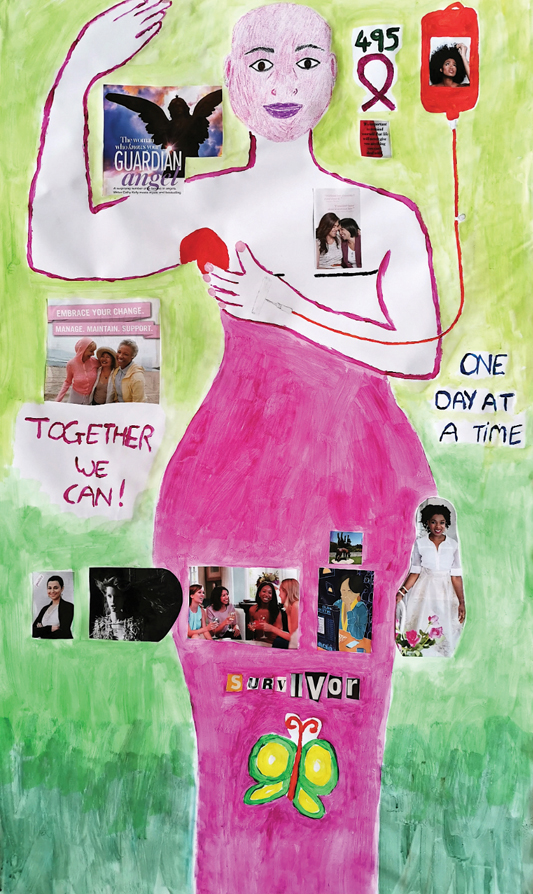 A personal word from the researcher

I’m telling breast cancer stories, firstly, to honour all the women who were brave enough to participate in my study, and, secondly, to remember those who passed away while the research was under way.

Listening to and re-experiencing their breast cancer stories with them has been the greatest privilege and honour. Not only has it changed me as a person, but it has also deepened my awareness and understanding of vulnerability, resilience and the sheer will to survive. I trust that through this work, their stories will continue to inspire others as they have inspired me.

Anri Smit is a doctoral graduate from the Department of Psychology at Stellenbosch University. Her PhD research involved a multi-modal narrative approach to gain insight into the breast cancer stories of South African women living with recurrent disease. Furthering her studies in the field of health, she is pursuing a Bachelor of Medicine and Bachelor of Surgery at the University of the Witwatersrand and aims to publish extensively from her doctoral research in international journals.

2 Replies to “Body mapping as storytelling”

Welcome to the Apr-May 2022 issue of Buddies For Life, the theme for this issue is Choose a healthier you. END_OF_DOCUMENT_TOKEN_TO_BE_REPLACED

Welcome to the Apr-May 2022 issue of Buddies For Life, the theme for this issue is Choose a healthier you. END_OF_DOCUMENT_TOKEN_TO_BE_REPLACED

Welcome to the Feb/Mar 2021 issue of Buddies For Life, the theme for this issue is Feb/Mar 2021. END_OF_DOCUMENT_TOKEN_TO_BE_REPLACED

Welcome to the Feb/Mar 2021 issue of Buddies For Life, the theme for this issue is Feb/Mar 2021. END_OF_DOCUMENT_TOKEN_TO_BE_REPLACED