Amanda Kuit talks nutrigenomics – the next generation food-medicine for better health. This insight creates opportunities to prevent disease and improve quality of life through food and tailored diets.

Food can be intrinsically linked to memories: love, happiness or sadness, but ultimately food is our fuel. While food can be a friend; it can also be an enemy.

Eating the ‘right’ food is vital for maintaining long-lasting health. Part of this includes not eating specific food that aggravates an allergy. But, what is the ‘right’ food? Should you eat huge amounts of fat or should you only eat spinach? Humans, in comparison to all other living creatures on earth, are the most confused species with regards to what they should eat.

The ‘right’ food depends a lot on who you are; the secret behind this comes down to genes. Each of us has a unique body code (genes) and, indeed, research has shown that food affects gene expression – the process through which the deoxyribonucleic acid (DNA) making up our genes is converted to ribonucleic acid (RNA), resulting in production of proteins.

The various proteins, formed at discrete points in this process, function as enzymes, hormones, and other substances on which life depends. Therefore, this interaction with food is of considerable significance.

The amount, form, and, even, the frequency of food consumed can affect protein manufacturing, resulting in less protein being produced; less optimal functional forms of proteins; or no protein at all. Depending on individual genetic variations and age, these effects may result in varying individual responses to diet and drugs.

Discoveries in genetics and other new fields of study (e.g. genomics, nutrigenomics, proteomics, metabolomics, and bioinformatics) make it possible to understand the varying individual effects of dietary nutrients in processes of our bodies at the molecular level. This insight creates opportunities to prevent disease and improve quality of life through food and tailored diets.

Let’s start with nutrigenomics: this combines the study of nutrition and genetics to discover the different ways people respond to food, based on their genetic makeup. While humans are very similar genetically, we all have slight differences in our genetic blueprints which set us apart from other people. These tiny variations determine the effect nutrients have on our bodies and how we metabolise the food we eat.

Personalised nutrition hinges on this two-way relationship between nutrients and genes. On one hand, the nutrients we consume can affect the way our genes are expressed; on the other hand, our genes are able to influence how our bodies respond to these nutrients.

The goal, for nutrigenomic scientists, is to unravel this complex interaction so that tailored diets can be developed which complement a person’s unique genetic profile. Not only will this optimise the health of the individual, but it may also work on a larger scale to help prevent society-wide diseases, such as obesity, Type 2 diabetes, cardiovascular disease, cancer and malnutrition.

Let’s use specific foods, as an example, to explain nutrigenomics based on recent studies:

Nutrigenomics also shows us how our genes can determine our response to certain foods. A great example of this is lactose intolerance. People who are lactose intolerant are unable to digest the natural sugars present in milk and other fresh dairy products.

This is because the gene responsible for making the necessary enzyme (lactase) is ‘switched off’, leaving their bodies unable to produce it. As a result, these people react badly to consuming dairy products, suffering from side effects, such as abdominal pain, bloating, diarrhoea and nausea.

It is in your power to change your genetic destiny in many ways and food can be one of those tools that could either be a potential trigger for disease or it could modify gene expression. The nutrients we consume can change a gene’s performance by acting on its control region…on or off!

Before you start eating olives and broccoli, try to exclude/change the following triggers that influence your genes far worst than food can fix it:

Most of us have a mixture of genes that make us susceptible to disease, and we have genes that protect us from harm. By knowing where you stand on this genetic spectrum, you can adjust your lifestyle choices accordingly. Genes determine our vulnerability but it is our lifestyle that determines to what extent these vulnerabilities will affect health and longevity. 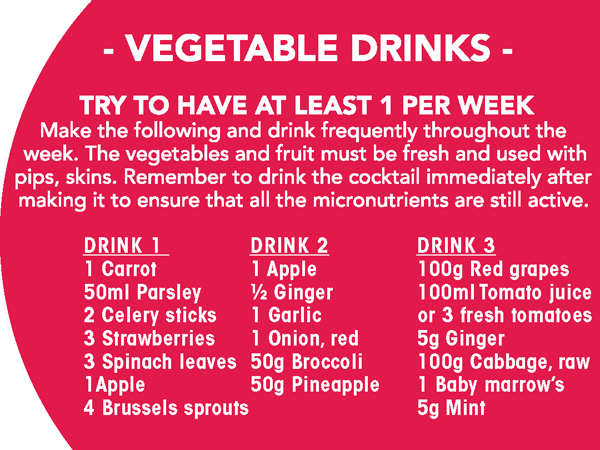 Nutrigenomics is about knowledge: first you need to understand your own lifestyle, disease profile, family history and biochemical results. Then you can start applying nutrigenomics after genetic testing. Genetic testing on its own will not guarantee health or longevity; given the present state of our knowledge, it is still too early, in most cases, to state specific foods with precision. 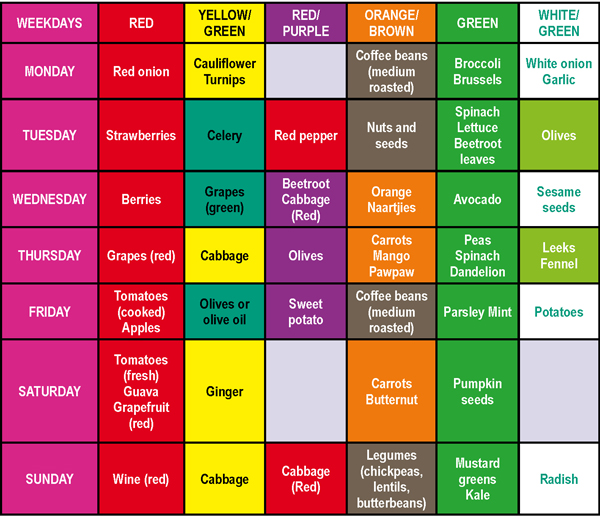 What is obvious is that lifestyle changes, especially food, is not a one-size-fits-all approach. There are, however, nutrients that stimulate higher levels of protein synthesis which we all can use. To the right is a colour chart and above are vegetable drinks to help you incorporate them in your diet each day of the week.

Welcome to the Apr-May 2022 issue of Buddies For Life, the theme for this issue is Choose a healthier you. END_OF_DOCUMENT_TOKEN_TO_BE_REPLACED

Welcome to the Apr-May 2022 issue of Buddies For Life, the theme for this issue is Choose a healthier you. END_OF_DOCUMENT_TOKEN_TO_BE_REPLACED

Welcome to the Feb/Mar 2021 issue of Buddies For Life, the theme for this issue is Feb/Mar 2021. END_OF_DOCUMENT_TOKEN_TO_BE_REPLACED

Welcome to the Feb/Mar 2021 issue of Buddies For Life, the theme for this issue is Feb/Mar 2021. END_OF_DOCUMENT_TOKEN_TO_BE_REPLACED