We hear how exercise and being active has played imperatives roles in Thamsanqa Mabuza and Gugulethu Halwala’s breast cancer journeys. 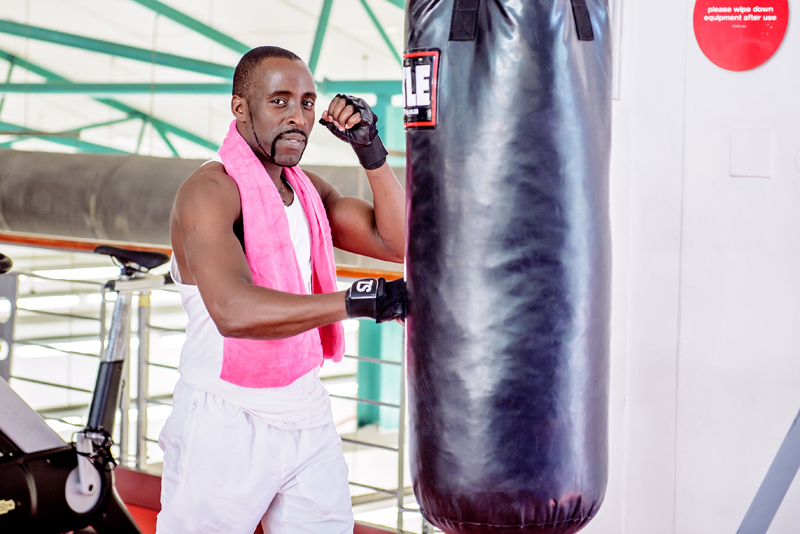 Thamsanqa Mabuza (31) lives in Olievenhoutbosch, Gauteng with his partner and three children.

The power of weight-lifting

Thami was encouraged by his boss to start weight-lifting to help reduce his asthmatic symptoms. Not only did Thami thoroughly enjoy it but if it wasn’t for weight-lifting, he would never have noticed the lump in his left breast.

He went to a clinic but due to not having an appointment and then not going on the right day, he was turned away on numerous occasions. He left it for about a year, but soon noticed the lump was growing whenever he trained.

He then went to another clinic and eventually got a referral letter to go to Helen Joseph Hospital Breast Care Clinic (HJHBCC). It was in March 2015 where a biopsy confirmed he had ductal breast cancer.

All shall be well

Even though the young father was in disbelief – he never knew that men got breast cancer – and cried when he was alone, the assurance of his doctors and the playful arguing of who was going to perform his lumpectomy (they all wanted to do it) indicated he was going to be fine. With his third child on the way, he knew he had to ‘man up’ and fight for his life.

His family accepted the news and were compassionate as was his employer. His gym partners weren’t shock that he had breast cancer but were more surprised at the fact that Thami – their friend – had cancer. 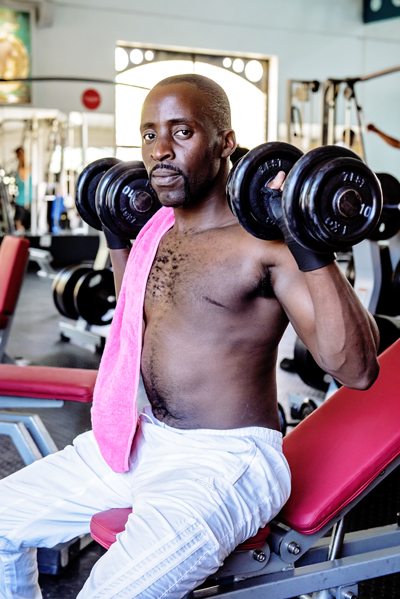 After Thami’s lumpectomy, eight cycles of chemotherapy – four being ‘Red devil’ – and 30 days of radiation were completed, followed by five years on tamoxifen. The side effects he experienced were constipation, joint pains and loss of hair. Due to this and the fact that his job entails operating machinery, his employer gave him a month’s leave. “I can’t thank my employer enough for the compassion that was shown,” Thami says. His eldest son was most concerned, always checking on him and asking how he was feeling.

After treatment, once the father felt strong enough, he went back to Loxion Fitness, the gym where he trained. He found in the beginning he battled as his pectoral muscle would burn and tense up when he lifted. But slowly, he managed to get back to his normal training routine.

Thami currently trains five days a week, in the evening, for an hour and half and thoroughly enjoys it.

With regards to diet, he tries to eat healthy with what he can afford, but does avoids foods that are considered to feed cancer cells, such as red meat, soy and sugar.

Impacting those around him

The 31-year-old gave an opening speech at the 2016 Avon Justine iThemba Walkathon, and aims to create awareness that breast cancer can affect anyone. He encourages people to not fear seeking help. “The earlier, the better – it can save your life,” he says. He recently took his sister-in-law to HJHBCC as she had symptoms; they are waiting for the results. 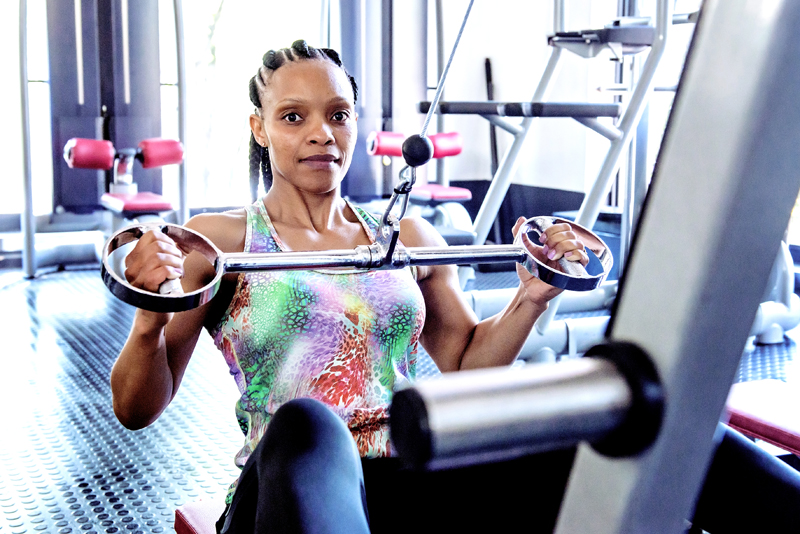 Gugulethu Halwala (39) lives in Weltervreden Park, Gauteng with her husband. They have two children, a 16-year-old son and a nine-year-old daughter.

Being a fitness lover, who was conscious of what she ate, Gugu never thought she would get breast cancer. As long as she can remember, she has loved running and exercising. She loved it so much so that she did a course in gym instructing. She was a gym instructor but then became a personal trainer. Unfortunately, after a year she had to stop as she couldn’t cope due to her still having a day job and then doing the personal training in the evening. Nevertheless, she continued with her own training at Virgin Active Roodepoort. This time was her ‘me time’. “When I am training, I am not a mother, I am not a wife. I am just Gugu and it’s my time to do what I want. The best is the feeling afterwards, even during. It makes me feel so good,” Gugu says.

Then last year, the mother was diagnosed with lobular breast cancer. She immediately thought her life was coming to an end. Her husband broke down as he had lost his father to pancreatic cancer and now thought he would lose his wife too. They were advised for her breast specialist to explain the disease to their young daughter. “I could never have explained it to my daughter the way it was described. It was excellent…when we got home my daughter asked, ‘When is the doctor taking the germ out?’ and was comfortable to speak to us about it,” Gugu says.

Her son was at boarding school at the time, and when he did come home, Gugu’s sister, who is a nurse, explained everything to him. “I found out later that when he went back to school, he asked the priest, at his school, to pray for me,” the mother says tearfully. “It’s comforting to know people are praying for you. It goes a long way.”

A double mastectomy was performed with immediate construction within a month of the diagnosis. She calls her new breasts – imperfect twins. Her reconstructive surgeon advised her to have further reconstruction, however, Gugu is still deciding saying, “I’m happy with my imperfect twins. To me, it’s like stretch marks after giving birth – bittersweet. I didn’t come for a make-over. I can wear my training tops to gym so I am happy,” Gugu explains. 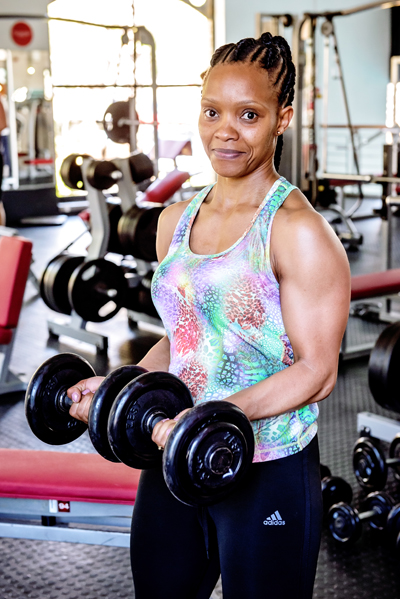 The mother will be on tamoxifen for five years   and goes for a Lucrin (gonadotropin releasing hormone) injection every three months. Singulair, a tablet for asthmatic patients, was prescribed by her reconstructive surgeon as her breasts were hard after surgery. This medication softened them.

However, her daughter doesn’t like the twins. “She’s too scared to touch them but my husband loves them.”

Gugu knew she was going to miss her workouts during her nine-week recovery time. “Exercising is my way to de-stress, and having cancer is stressful, and now I wouldn’t be able to rid myself of this stress in the gym. But I had to tell myself, ‘Yes, I love exercise but it not the priority right now. I need to survive.’” Her reconstructive surgeon warned her any exertion would open her wounds. Gugu says that she knew food was what was going to carry her through her recovery, adding if she did gain weight – she would have been even more strained.

Back to ‘me time’

As soon as the 39-year-old was given the go ahead to train, she did exactly that. “It was a slow start, but I eventually got back to my peak strength. She currently trains six times a week for two hours in the evening; she alternates between weight-training and running. The mother of two recently ran the 21km Old Ed’s race and wants to go into personal training full-time. “I am going to do it because I really enjoy it.” 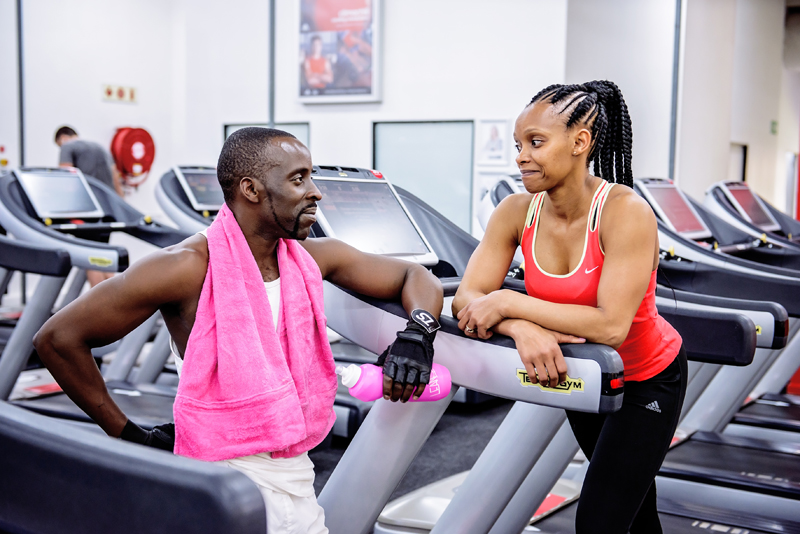 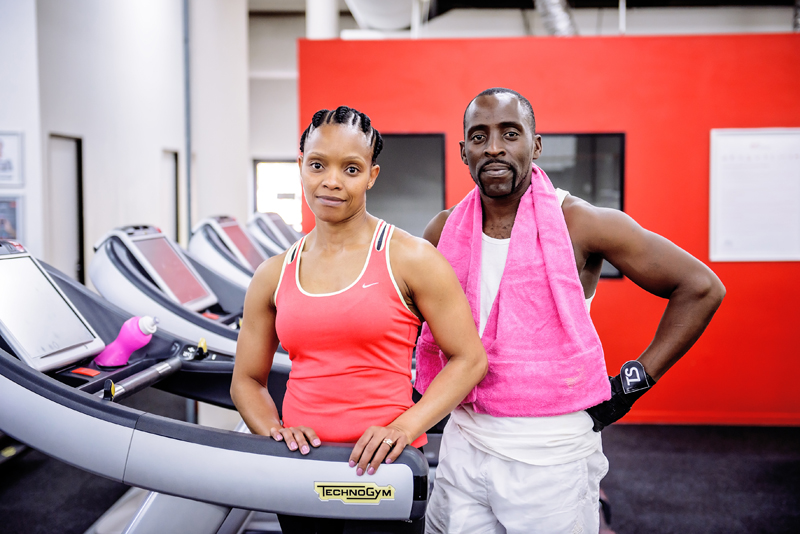 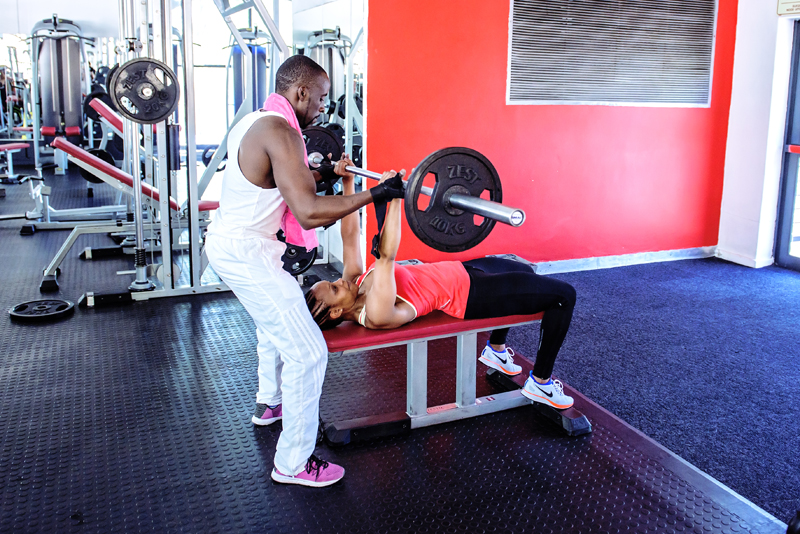 Thank you to Virgin Active Roodepoort for the use of their facilities.

Laurelle is the Editor at Word for Word Media and graduated from AFDA with a Bachelor of Arts Honours degree in Live Performance. She have a love for storytelling and sharing emotions through the power of words. Her aim is to educate, encourage and most of all show there is always hope.

Welcome to the Apr-May 2022 issue of Buddies For Life, the theme for this issue is Choose a healthier you. END_OF_DOCUMENT_TOKEN_TO_BE_REPLACED

Welcome to the Apr-May 2022 issue of Buddies For Life, the theme for this issue is Choose a healthier you. END_OF_DOCUMENT_TOKEN_TO_BE_REPLACED

Welcome to the Feb/Mar 2021 issue of Buddies For Life, the theme for this issue is Feb/Mar 2021. END_OF_DOCUMENT_TOKEN_TO_BE_REPLACED

Welcome to the Feb/Mar 2021 issue of Buddies For Life, the theme for this issue is Feb/Mar 2021. END_OF_DOCUMENT_TOKEN_TO_BE_REPLACED