Working with your subconscious feelings and beliefs are important for sustainable and long-term management of any health challenge.

I suggest that the body and soul react to each other in sympathy. A change in the state of the soul would necessarily have an effect on the body and vice versa. – Aristotle, 400 BC

‘Our thoughts create our reality.’ This is a strange concept for many of us. How could what you think, possibly make you sick or well, happy or unhappy? Candace Pert is a neuroscientist who did a lot of research on the neuropeptides. She was the first to call them the ‘molecules of emotions.’

Peptides are tiny pieces of protein. Protein comes from the Greek word ‘proteios,’ meaning primary. Proteins are the first material of life, as we know it. Peptides consist of strings of amino acids of varying lengths, joined together in a necklace by very strong bonds made of carbon and nitrogen. Between 10 and 100 amino acids that form a strong bond, are called peptides. Between 100 to 200 are called polypeptides and more than 200 are called proteins. Amino acids are the letters that when combined in certain sequences, form the words that are peptides, or the sentences that are polypeptides or proteins. These make up a language that forms and directs the function of every single cell, organ and system inside the body, from the deepest vibrations of the DNA molecule inside the nucleus of every cell, to the macrocosmic systems function of the whole individual being. More than 90 neuropeptides have been identified so far, associated with mood changes, nerve, hormone and immune regulation. Well-known groups of neuropeptides include the neurotransmitters that carry messages across synapses in the nervous system, growth factors, gut peptides, and immune system modulators (e.g. interleukins, cytokines, chemokines, growth inhibitors that tell cells when to stop growing). A better term for the peptides might be informational substances. Other common peptides include the endorphins (our own happy hormones), insulin (responsible for blood sugar control), vasopressin (responsible for blood pressure), sex hormone releasing hormones, and serotonin (the feel-good neurotransmitter).

There are 20 essential amino acids found in the human body, meaning that we have to take it in from the food we eat, as they’re not manufactured inside the body, hence ‘essential.’ The first peptide, secretin was discovered in the gut. This surprised scientists as they thought all physiological functions were controlled purely by electrical impulses from the brain and nerves. Then the endogenous endorphins, enkephalin peptides that bind to the body’s own opiate (morphine-like) receptors inside the brain, were found. This lead to a mad search for receptors and their binding peptides inside the brain, hence the pronoun ‘neuro’peptides. It was only realised much later that every single peptide was made in many parts of the body, including of course, the brain. Now we know that the peptides are actually manufactured throughout the whole body, e.g. immune cells, bone marrow and gut cells have receptors for, and produce, neuropeptides.

The T & B-cells of the immune system communicate with the brain and vice versa via the neuropeptides.

Some emotions suppress lymphocyte (immune) function, others may enhance it.

All the neuropeptides have a similar molecular structure, with subtle differences in the tertiary structure, meaning that only the frequency and amplitude at which each molecule oscillates (wavelike vibrations of electrons in each molecule), differ. Neuropeptides change configuration (like a chameleon) due to emotional influence, according to specific thoughts and emotions. Depending on the thoughts and emotions, specific neuropeptides are made in the brain and nervous system, white blood cells, reproductive system, digestive system and heart, to name but a few. They form a two-way network between psyche and soma, mind and body.

The complicated and complex communication network between cells, neurotransmitters, neuropeptides, hormones, immune system, blood and nerves, demands a remarkable orchestration of effective communication and integration of form and function, for the body-mind to work as one healthy, balanced and integrated whole. Pert describes the mysterious energy connecting body to mind & emotions as the free flow of information carried by the biochemical of emotion: neuropeptides and their receptors – the information substances. The strong link between emotional responses and the biochemical change they produce specifically in the immune system forms the basis of the field known as psycho-neuro-immunology or PNI. Cortisol secreted during long term stress, plays a role in immune suppression. Structural changes in the neuropeptides play a role in immune incompetence. Pert says: “it is possible now to conceive of mind and consciousness as an emanation of emotional information processing, and as such, mind and consciousness would appear to be independent from brain and body.” 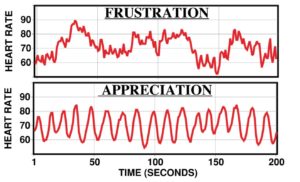 Notice the heart rate differences based on two very common human emotions. Appreciation leads to a slower, more coherent heart rate. We can choose in any moment to run the gratitude circuitry in our minds.

Let’s simplify the concept by using practical examples. The specific feel-good peptide (e.g. serotonin), bind to its specific receptors on the cell membrane. This sends a ‘feel-good’ message to the inside of the cell, right into the nucleus.

The message influences every function the cell is responsible for, including the expression of the DNA molecule. Now consider the fact that you constantly think of things others have done to harm you; or you feel stressed out and overwhelmed, with unhappy, resentful, angry thoughts and feelings that grow and increase to disproportionate levels every time you think about it. The thoughts become emotions, then the neuropeptides that course through your body-mind, influencing your mood, your cell function and efficacy. Do you think that any cell receiving these messages for 30 years, would still feel like functioning well enough for you to be optimally happy, alive and fully self-actualising to become all you’re meant to be?

I’ll leave you to ponder this question!

Part 2 of this article is all about learning to identify your emotions to take control of your own health and well-being.

Welcome to the Apr-May 2022 issue of Buddies For Life, the theme for this issue is Choose a healthier you. END_OF_DOCUMENT_TOKEN_TO_BE_REPLACED

Welcome to the Apr-May 2022 issue of Buddies For Life, the theme for this issue is Choose a healthier you. END_OF_DOCUMENT_TOKEN_TO_BE_REPLACED

Welcome to the Feb/Mar 2021 issue of Buddies For Life, the theme for this issue is Feb/Mar 2021. END_OF_DOCUMENT_TOKEN_TO_BE_REPLACED

Welcome to the Feb/Mar 2021 issue of Buddies For Life, the theme for this issue is Feb/Mar 2021. END_OF_DOCUMENT_TOKEN_TO_BE_REPLACED