Oncology is an ever-changing specialty, with new treatments in the treatment of cancer being developed all the time. This is especially true with radiation therapy, which has improved in leaps and bounds in the past decades. From the initial treatments where the oncologist physically drew the area to be irradiated on the patients, to the highly sophisticated Image Guided treatments of today, Radiation Oncology has come a long way. All this means better cancer cure rates and less morbidity from treatments.

Radiation Therapy is often less understood than other treatment modalities, which most doctors and patients are more familiar with, such as chemotherapy (drugs) and surgery.

What is Radiation Therapy?

Radiation Therapy is a treatment modality, which uses ionising radiation (photons, electrons, protons, etc.) mainly to treat malignant tumours. The way that this is achieved is by aiming the radiation at the tumour and the radiation then causes DNA damage within the cancerous cells in order to take away the cells ability to divide and hence the tumour dies. The radiation can achieve this either directly, by ionising within the DNA molecule, or indirectly by the actions of free radicals which it forms within the cell which damage the DNA. 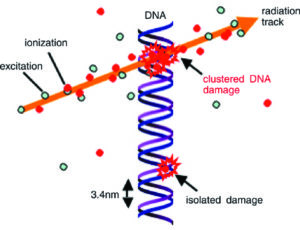 Radiation Therapy for breast cancer is often done as part of a combination treatment involving surgery and/or chemotherapy. The decision on whether or not radiation is required is decided upon by looking at the stage of the cancer and the operation done. Radiation is needed in addition to surgery if a lumpectomy is done (ie. the whole breast is not removed), or if the tumour is a more advanced stage.

Radiation is given daily from Monday to Friday. Treatment courses can vary from 3 to 7 weeks. Each radiation treatment is generally 10-15 minutes.

On the whole, breast cancer treatment is well tolerated. The two most common side effects are tiredness and a skin reaction over the breast.

The tiredness is not due to any physiologic abnormality, and generally some light exercise on the days of treatment helps to minimise it.

The skin on the breast can become red, inflamed and itchy, usually around the third week of radiation treatment. It can resemble sunburn. The oncologist may prescribe a cortisone cream from the start of treatment or when the skin starts to become inflamed. There are also new products on the market such as R1 and R2 creams which show promise in reducing these skin side effects, and quickening the healing process. These may be prescribed instead of cortisone cream from the start of treatment.

To minimise the skin side effects on the breast during radiation therapy, the patient should also try to avoid soaps with perfumes on the areas being radiated, and when drying, to pat dry with a towel. The take home message is to be very gentle on the skin.

The use of radiation therapy is one of the most important tools in the treatment of breast cancer and with modern advances, it is becoming more effective with less side effects.

Welcome to the Apr-May 2022 issue of Buddies For Life, the theme for this issue is Choose a healthier you. END_OF_DOCUMENT_TOKEN_TO_BE_REPLACED

Welcome to the Apr-May 2022 issue of Buddies For Life, the theme for this issue is Choose a healthier you. END_OF_DOCUMENT_TOKEN_TO_BE_REPLACED

Welcome to the Feb/Mar 2021 issue of Buddies For Life, the theme for this issue is Feb/Mar 2021. END_OF_DOCUMENT_TOKEN_TO_BE_REPLACED

Welcome to the Feb/Mar 2021 issue of Buddies For Life, the theme for this issue is Feb/Mar 2021. END_OF_DOCUMENT_TOKEN_TO_BE_REPLACED