Gillian Bruce updates us on how researchers are using information from how dogs sniff cancer (scenting) in order to make artificial noses that can be used in doctor’s rooms for diagnosis.

My Golden Retriever, Arizona, and I often go to the park via my favourite bakery to pick up an apple cinnamon muffin. I love the smell of the combination of the apple and spices all baked together.

Arizona is not averse to sharing. But with her 2 – 300 million receptors within her nose, she has a special ability to layer scent. This means that when

I smell the combination of apple, cinnamon and spices, Arizona is smelling each item on its own. She can smell the apples, the cinnamon, the items used to bake the muffin, the scent of the person who packed the muffin, and her human (me).

This layer scenting is what allows Arizona to tell the difference between different dogs and, if she was tracking a specific item or human, them from all the other scents. 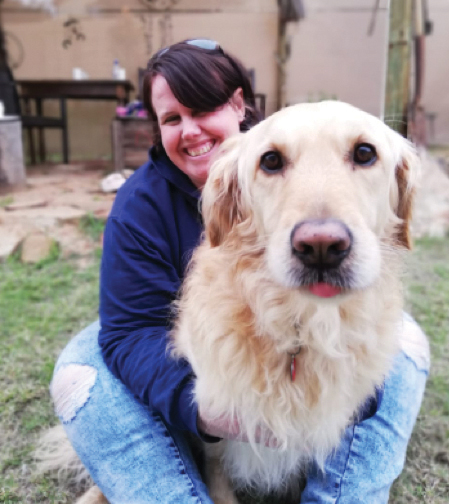 As I sit and let her run in the park, she has another superhero dog sense that helps her smell in stereo. She can smell the hormones I give off when I’m happy, nervous, or scared. She can smell the tiny amounts of perspiration or adrenaline that are emitted from my body.

Arizona doesn’t read human behaviour or body language with her eyes; she literally smells my emotions and acts accordingly. As with every dog, each nostril splits into two parts: smelling and respiration.

The importance of a wet nose

Wet noses of dogs are important for smell. By licking their noses, they add mucus to the nose. By doing this, the scents stick to their wet noses and the molecules dissolve into the mucus to be transported in the air they breathe in.

These wet noses have made dogs highly sought-after in many segments of society. Dogs have been trained as highly-skilled police-, military-, sniffer- and rescue dogs, as well as caring companion and assistance dogs.

When I watch Arizona, it’s not hard to see how this herding behaviour can be adapted into guide dog or medical assistance behaviour, or their hunting behaviour into chemical or bio-chemical detection.

I mean, if dogs can jump out an airplane and sniff out bombs, or draw money for their human in a wheelchair, or sense when their human is about to have a seizure, learning to smell cancer (scenting) doesn’t seem like such a crazy idea.

During disease and cancer within the body, there are metabolic changes to the cells. These changes release volatile organic compounds (VOCs) which the body needs to excrete the same as it would any other waste product. VOCs are excreted via the lungs, kidney and skin.

Each disease has its own VOC fingerprint and that seems to be what the dogs can smell. And, we are only figuring out now what those markers are.

The dogs, though, must be trained to ignore healthy tissue scents, and all other diseased tissue that may be found.

Just like I reward Arizona with a treat, or a ball game, when she learns a new trick or listens to my commands, each time a cancer detection dog gets the answer correct, they get rewarded with either food or their favourite toy. This ensures work is fun for the dogs and is something to be looked forward to while stimulating them.

Trials for sniffing cancer have been carried out around the world with sensitivity and specificity of between 95-100%, depending on whether it was a single-blind or double-blinded trial.

There have been several trials since 2008, with the last one being concluded in 2018. However, it’s not the results of the cancer sniffing dogs that are of interest. They have proved they can sniff cancer beyond doubt. We just can’t have them running around oncology units smelling patients. Not all patients would take it too well, as some can be forgiven for being cat people.

A dog’s nose knows what it smells, and it has taught us humans the secret: how to use the VOCs and develop a less intrusive device that even cat and mouse lovers will be able to use. These are artificial noses, called Na-Nose and E-nose.

Just three months ago, the director of the University of Pennsylvania’s Working Dog Centre (where they train and trial dogs to sniff cancer) said they had started using the information gathered from the trials done with ovarian and lung cancer patients (the most difficult to diagnose and normally diagnosed in the later stages).

They were using the data from the dogs to compile information for Na-Nose. This was in its testing stages with four dogs, their handlers, a chemist and oncology specialist.

This could be life-saving for many patients. With this technology, lung and ovarian cancer could be caught earlier, treated and more patients could be in remission. 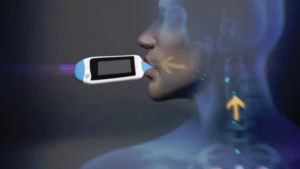 Bats and dolphins brought us echolocation. So, it’s definitely not such a crazy idea that man or woman’s best friend could be the reason cancer detection is done with a mechanical nose alarm in a GP’s office, before going for an MRI or CT scan.

And, it’s not only cancers that researchers are looking to test for. They’re hoping that the artificial nose will be able to pick up VOCs of diabetes, Parkinson’s, epilepsy, and malaria.

Some researchers also want to trial to see which other animals can be good at scenting by detecting VOCs. There is currently a trial being run in South Africa, in association with Elephants for Africa Forever1, testing to see if elephants can smell VOCs. Although, they’re not proven as accurate as dogs have been, they’ve proved to be quite proficient at the task.

Gillian Bruce is a certified clinical case manager at ICON. Oncology is a passion of hers. She loves to learn what’s new, and working with the medical aids, doctors and patients because she believes together they make a difference.

Welcome to the Apr-May 2022 issue of Buddies For Life, the theme for this issue is Choose a healthier you. END_OF_DOCUMENT_TOKEN_TO_BE_REPLACED

Welcome to the Apr-May 2022 issue of Buddies For Life, the theme for this issue is Choose a healthier you. END_OF_DOCUMENT_TOKEN_TO_BE_REPLACED

Welcome to the Feb/Mar 2021 issue of Buddies For Life, the theme for this issue is Feb/Mar 2021. END_OF_DOCUMENT_TOKEN_TO_BE_REPLACED

Welcome to the Feb/Mar 2021 issue of Buddies For Life, the theme for this issue is Feb/Mar 2021. END_OF_DOCUMENT_TOKEN_TO_BE_REPLACED