Liza Wolfaardt, mother and wife, tells us why ‘I am Woman’ after breast cancer.

Liza Wolfaardt (40) lives in Somerset West, Western Cape   with her husband and their two children.

“Today (24 January 2017) marks the end of a chapter in my life. I recently updated my CV and wondered if I could add cancer survivor? I wish I could list it under Education – as I never attended a school that taught so many lessons and handed out so many tests.

I know I can’t list it under Achievements. I’m ashamed to say at first I thought I will be this brave warrior. I unfortunately saw others fight and pray just as much as I did, maybe even more, but the odds were against them. It shattered my heart to see them suffer,  but they’ve strengthened my spirit.”

These are the words of a woman; a woman who had her ovaries, Fallopian tubes and breasts removed, a woman who is classified as a breast cancer survivor, a woman who has the BRCA2 8162delG (Afrikaner) founder mutation. This woman is Liza Wolfaardt.

Liza believes her life was saved due to the breakthrough in BRCA 1 and 2 testing and genetic counselling.

Due to both her paternal grandparents having cancer (breast and colon) and her father having the BRCA2 gene (he hasn’t had cancer), she elected to have the gene test in 2014.

She paid around R1 200 for it; it confirmed she had the BRCA2 8162delG (Afrikaner) founder mutation.

She decided to have a prophylactic double mastectomy to reduce the risk of developing breast cancer.

Although, finding a surgeon willing to do the surgery was not easy. “It was considered a medical taboo to remove healthy tissue,” Liza says.

Two years later, she found a cooperative surgeon. But after the preparations for the operation and discussions on reconstructive plastic surgery, a doctor discovered that even though Liza wanted to prevent breast cancer, the disease had already manifested. The procedure that she fought for, now became a necessity. Liza was diagnosed with Grade 3 infiltrating ductal carcinoma (oestrogen-receptive) on 16 April 2016 at the age of 39.

A bilateral salpingo-oophorectomy (removal of both ovaries and Fallopian tubes) and a double mastectomy with immediate reconstruction was performed, followed by eight months of chemo and six weeks of radiation.

Liza says, “I was not traumatised at all by the double mastectomy. I had this incredible sense of relief that the illness was gone. I did not experience waking up with a wrecked body, but rather waking up with a glorified and healed body.”

Liza has further reconstruction ahead, which consists of lipofilling, then the expanders replaced with prostheses,     and then more lipofilling. 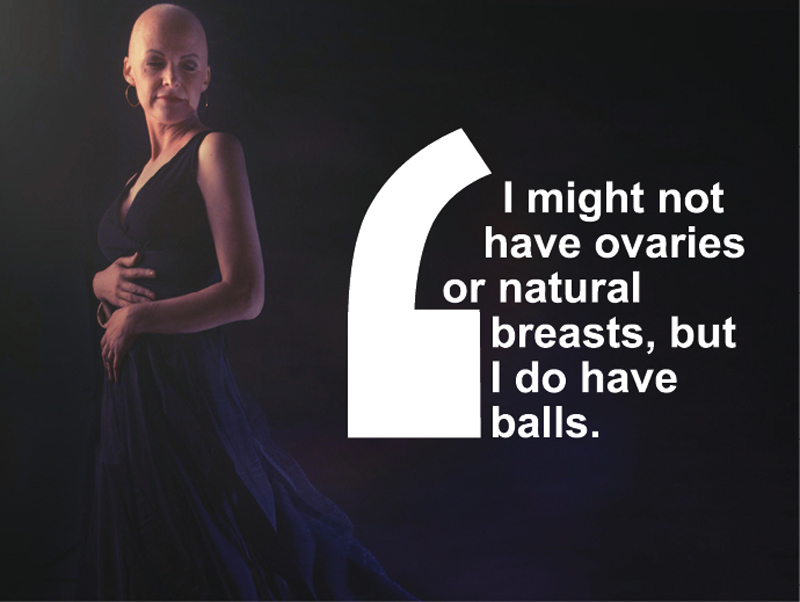 During Liza’s oncology treatment, she was so aware of how many others it took to replace one female being ‘man-down’ saying, “There are endless lists that make a household run like a well-oiled machine. I’m not a feminist at heart, and I’m married to a wonderful man, but I did become incredibly proud of the role I play in this world as a woman.”

The mother was deeply touched by how many women brought her gifts and showered her with love and affection. “I was surrounded by a pride of lionesses that circled around my cubs; they shuttled my kids to activities, they brought my husband dinner and some even fed the cat,” she says.

Once the bilateral salpingo-oophorectomy and double mastectomy were completed, she remembered how badly the media treated Caster Semenya. “They were so cruel in saying that she was not female. Now, not only was I confronted with a deadly disease, but I was suddenly, physiologically speaking, even less female than this remarkable icon. But I was not sad whatsoever,”   Liza explains.

“One morning, my husband was getting the kids ready for school whilst I was still in bed. The thoughts of what I was about to experience within a few hours, getting my fourth ‘Red devil’, rushed through my mind. I shed a tear. Then it dawned on me…I might not have ovaries or natural breasts, but I do have balls. I got my act together, stood up, and bravely walked out with a smile, hugging my kids goodbye,” Liza says.

Insight worth far more than rubies

Previously, Liza would be so tough on herself and her physical appearance. She was extremely health conscious, reading food labels and counting calories, exercising every day, and always searching for a way to better her appearance – let it be hair extensions or bleaching her teeth. But, all of these ‘petty things’ vanished within a flash the moment she was diagnosed.

“Cancer brought me a deep appreciation and self-acceptance that is worth far more than rubies. With all of my scars, my bald head, no eyebrows, or lashes, acne skin (induced by chemo), I strangely found this new confidence. I felt incredibly beautiful. Every morning I saw myself in the mirror, I was the prettiest thing I’ve ever seen. I was just so grateful to be alive. The very fact that I could get out of bed already made me feel stunning,” Liza says.

This beautiful woman was generously offered two photo shoots by renowned international photographers Abri and Joannette Kruger. At the time of Liza’s diagnosis, she was the project manager of their house renovation. She decided not to pull out and continued with the project, despite having cancer. Abri and his wife, Joannette, were deeply grateful and the photo shoots were their way of saying thank you, and displaying what a remarkable woman Liza is.

Prior to treatment, the breast cancer warrior was adamant to have the first shoot on the last day that she was ‘still a female’. “Looking at those images, I am astounded at how peaceful and happy I was…hours before everything would be removed forever. I was a woman then, and I am woman now.”

As her healing became evident, so did the completion of the project. It was tough on all of them and the second shoot was a fun way to end it all.

Liza made the dress she wore. “It’s made out of multiple strings of ribbon, ripped netting, and small pieces of fabric. It is a symbol of how there can be beauty even though ripped into many pieces,” Liza explains.

Laurelle is the Editor at Word for Word Media and graduated from AFDA with a Bachelor of Arts Honours degree in Live Performance. She has a love for storytelling and sharing emotions through the power of words. Her aim is to educate, encourage and most of all show there is always hope. editor@buddiesforlife.co.za

Welcome to the Apr-May 2022 issue of Buddies For Life, the theme for this issue is Choose a healthier you. END_OF_DOCUMENT_TOKEN_TO_BE_REPLACED

Welcome to the Apr-May 2022 issue of Buddies For Life, the theme for this issue is Choose a healthier you. END_OF_DOCUMENT_TOKEN_TO_BE_REPLACED

Welcome to the Feb/Mar 2021 issue of Buddies For Life, the theme for this issue is Feb/Mar 2021. END_OF_DOCUMENT_TOKEN_TO_BE_REPLACED

Welcome to the Feb/Mar 2021 issue of Buddies For Life, the theme for this issue is Feb/Mar 2021. END_OF_DOCUMENT_TOKEN_TO_BE_REPLACED